"Yer but it's only February"

The first real early season test comes round this Saturday in the form of the Eddie Soens Memorial. I'll be lining up alongside some blokes called Edward Clancy MBE and Dean Downing... Alright it's a handicap so I'll be lining up in front of them with a few minutes head start. Funnily enough that doesn't make the prospect any less intimidating. I've been following the race for a while; it's a great event that normally pulls in a strong field. True to the usual formula of a handicap the race will come back together far too quickly and a lot of the 3/4 guys will be churned out the back of the bunch pretty soon after. Best case scenario for me is going to be finding some like minded 3rd cats and hammer the pace hard from the off then prepare for the attacks when the big lads catch up. Maybe hang on for a lucky few points but I'm doubtful I'm capable of hanging on against the combined strength of several Elite teams.

I really wanted to write up a decent report of my first race back in Wales but in all honesty it was a lack lustre affair and I found myself bored to tears by the end. However, looking at the pictures and reports of the racing with Forza Cycles RT at Llandow, South Wales I get the impression it was a great day out with a pretty well stocked and strong field, I wish I could afford the petrol to support the team and David Bees (race organiser) in racing somewhere a little nearer team HQ.

Anyway to the above titled point. I sat down to start writing an account of my recent racing and found myself bored by the second paragraph. There was nothing to write about. Nothing happened.

There's a well established culture in the UK of people saying the phrase "It's only [insert month here] I'm not racing yet". I admit I used to be guilty of it when I was younger. No more. I'm taking back the phrase. What it should be is an excuse for the process of exploding off the front of the bunch on kilometre one, dying within a few minutes of effort, falling back to the bunch and repeating steps one through three until in pain, cross-eyed and preferably delirious. Instead the phrase is used as an excuse for 75% of the peloton to sit on, letting a handful of guys willing to kill themselves in search of some early season race conditioning do the work.

When was the last time you paid a tenner to see a film only to sit with your back to the screen because the plot was a bit difficult to get a hold on? It's the same idea. You pay money, fuel up, get the bike out and bloody race. I don't give a flying toss what month it is!

I'm reading reports from Josh in Brittany and hearing of massive fields in 130km+ races done at 44kph average. I'm jealous; I wish I'd grown up with that culture of racing. Can you imagine how great our cycling scene would be if from February through to October we actually entered races to race? I don't want to start a revolution or anything here, I'm just saying this is why until March I won't be featuring in many results sheet. I'll be the bloke that "got suckered" into leading the bunch round the last lap before the sprint holding a pace of 50kph for as long as I can before some lazy sods come past in the last 200m to show there face at the front of the race for the first time.

End rant. Thanks for reading.

Reports from Josh's latest outings can be found in the Links section on the left. I'll be living vicariously through his reports until later in the season I think.
at 18:43 2 comments:

Cutting my teeth all over again

The later half of last season saw me do no racing what so ever. A demoralising Ras De Cymru 5-Day last summer saw me finish 3 places from dead last on home soil; I basically became a rolling parts wagon for the rest of my team by the 2nd day. After that I lost all motivation to train amongst 2 house moves and various financial struggles. However, retroactively, I have been awarded 1 point for the Team Time Trial. I'm not totally sure I deserve it given the circumstances; I was dragged down the first mile and a half of the course by probably the strongest man in Welsh Time Trailing, Richie Harris, and then dropped to limp my way back to finish. But I'll take it, so until the rankings get updated I am the highest scoring 3rd cat in the North-West. Silver lining found. Moving on.

This season is kicking off alot earlier than last year, my logic being; I need to re-learn some race craft and recondition myself to the kind of high intensity you can't recreate in training. Interestingly there is nothing in the way of Road Racing around Manchester this early in the season. Brief bit of searching and Google-mapping churned out a series of races up near Middlesbrough run by Velo29 Events.

The first round, in late January, was snowed off leaving a large field with free entry to the 2nd event. Perfect! Crit racing, early season nerves, larger than average peloton and massive differences in strength and handling ability across an E/1/2/3/4 field. The 4th cat support event had already seen an outing for the on hand ambulance crew. 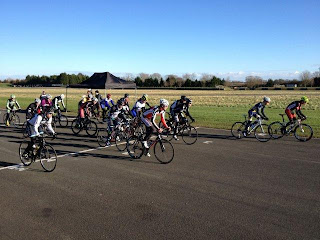 The race was run as a Handicap over 15laps of Croft Circuit. Weather reports the previous day had shown temperatures of 2*C feels like 0*C, winds of 11mph gusting to 25mph. Grim cycling weather indeed. The race was back together within 3 laps. Not long after that the eventual winner, Jack Rees Achieve CC, and several others made the decisive attack that left the main field chasing a single point for 10th. Cross winds hampered any attempts I made to get a descent chase going because every time we hit the windy home straight or the long back straight there was a mass shirking of responsibility from the front dozen riders leavening me to drive through with no one on my wheel. Eventually I was resigned to the fact the bunch was going to be racing for 10th. Basically the race became a passive and boring ride to the last lap. A WD-40 jersey mopped up the last points paying position while I placed 14th. I know. Not amazing but better than expected.

The second race, I came prepared. The previous event had been a bit of a shambles. No real warm up, not enough food and not knowing the circuit or any other riders in the field made for a lonely ride. This time the turbo was packed along with a ton of pasta to boot for the 2 hour drive to the start. Half and hours warm up, then a few laps of the track to reacquaint myself with it. The whole day was a total polar opposite of last time. Mild (for February), light wind and a dry track, time to don the deep-sections and crank the pressures to 140psi.

From the off I was setting the pace leaving the bunch with a half hearted attack from the line just to see who was awake. This continued until I formed some ideas, Rock Racing and Blumilk seem keen but very few others. Handy as both teams were well stocked on riders. We settled into a high paced through-and-off and had the 4th cat group insight by the end of the 3rd lap. I made a leap of faith attempting to be the first rider to catch the 4th cats alone while (hopefully) the two bunches behind would get tangled. They didn’t. Blumilk had drilled the pace to make sure I was pegged at no more than 7 seconds. Legs tested, feeling surprisingly good.

The following few laps consisted of more turn taking and coming to the intermediate sprint the E12 bunch was still no where to be seen. True to early indications Rock Racing and Blumilk had the bunch lined out for the sprint. A little bit of gentle leaning saw me slot into 3rd inline round the final corner. My peripheral vision immediately offered up several indications it was sprint time and with relative ease it was over not another rider with a bikes length of me. Far from what I was expecting given my half a season away from racing.
Within a lap of the sprint we were caught, the pace upped by 5 kph and again Jack Rees along with his Achieve CC team ran away with it while Blumilk took a couple of high placing.

Totals for the day:       Prize money +£15
Race entry -£15
Petrol -£40
I’m not saying I’m not grateful to the organisers for including a prime but I’m pretty sure the French payout better for their sprints.

Congrats to Josh Lawless on his first race over the channel, by the sounds of it the whole British part team placed within the top 20. A links to Josh’s blog and race report can be found on the left hand side of this page.

I'll make my intentions clear from the word go. I want to earn my living from cycling. I can't think of a single better way to live than on a bike.

…so a bit of background. During an unsuccessful stint at Swansea University I met a young bloke called Josh Lawless. At the time he was a strong Triathlete with very little prowess in the hills and even less grace while sprinting the thing he did possess was immense power. At the time we agreed we'd both have a crack at the professional cycling world.

One year on and Josh is Brittany bound leaving me to (due to other commitments) enjoy a combination of the North-West’s finest weather and Cheshire roads.

Other commitments aside, I have the time, inclination and pent up cycling energy (borderline frustration) to get cracking.

I want this blog to serve as proof that a 3rd cat roadie from Wales can make his or her way out of the UK and into the 2.2 and 2.1 UCI racing scene in Europe, having great fun on the way and meeting some amazing people.